President Trump skipped a special side-conference about the COVID-19 pandemic at the virtual G20 summit to play golf in Washington D.C. amid his refusal to concede in the U.S. presidential election to Joe Biden.

Speculations regarding the President’s attendance at the international event flew all week, but Trump on Saturday appeared via video-conference to the 15th annual G20 summit hosted by Saudi Arabia.

However, Trump was spotted hitting the green at the Trump National Golf Club Washington D.C. in Sterling, Virginia, some 30 miles from the White House soon after.

It’s the 298th golf trip Trump has made during his four years of presidency.

According to CNN, Trump had arrived for the conference at 8am before skipping the ‘side event on Pandemic Preparedness’ and leaving the White House by 10am as UK Prime Minister Boris Johnson spoke.

President Trump (right) played rounds of golf on Saturday after virtually attending the first day of the G20 summit, which is hosted by Saudi Arabia this year 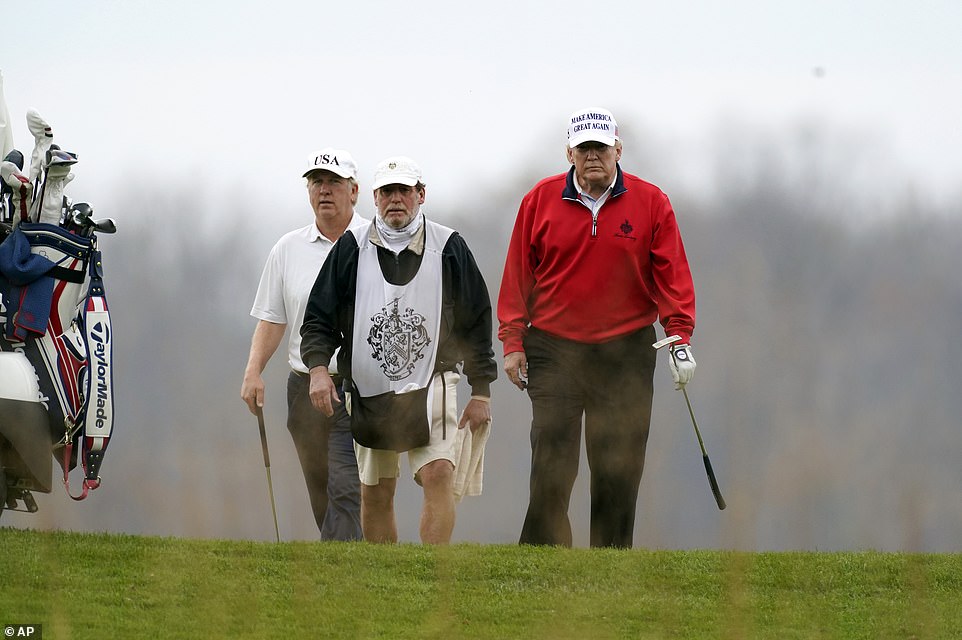 The latest G20 summit, scheduled for November 21 and 22, will likely be his last after the 2020 Presidential election was called in Joe Biden’s favor – but Trump has not yet conceded 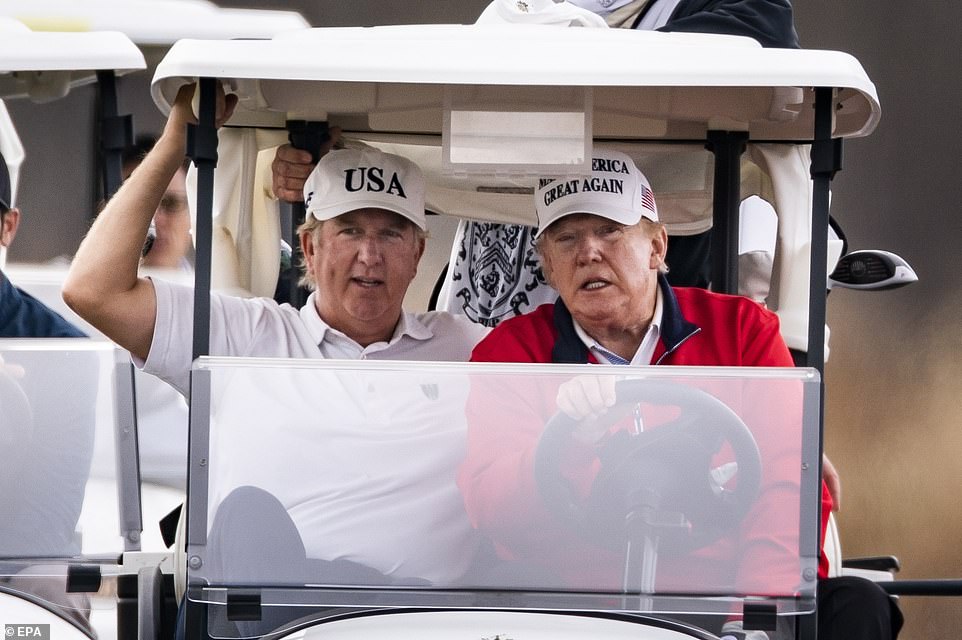 President Trump (right) played golf for the 298th time since becoming president at the Trump National Golf Club in Sterling, Virginia, on Sunday following the first day of the G20 summit 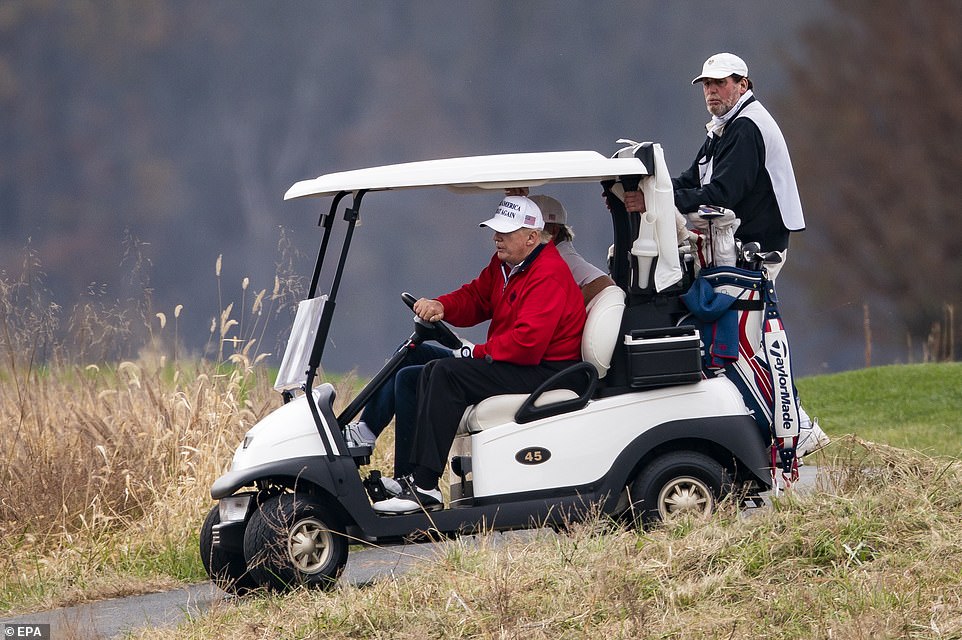 Three weeks ago, the Associated Press and several networks called the contentious election race in Biden’s favor four days after ballots were cast.

The Trump campaign has since launched voter fraud allegations and accused Biden of essentially stealing the election.

Rudy Giuliani, Trump’s personal lawyer and longtime defender, held a press conference on Thursday to decry ‘massive fraud.’ No evidence has been revealed yet.

But Trump has maintained that he’s the election’s actual victor and has yet to concede, muddying up the waters on Capita=ol Hill as inklings of a smooth transition dissipate.

If Trump’s plan to overturn the election fail, this latest G20 summit will be the last of his administration. 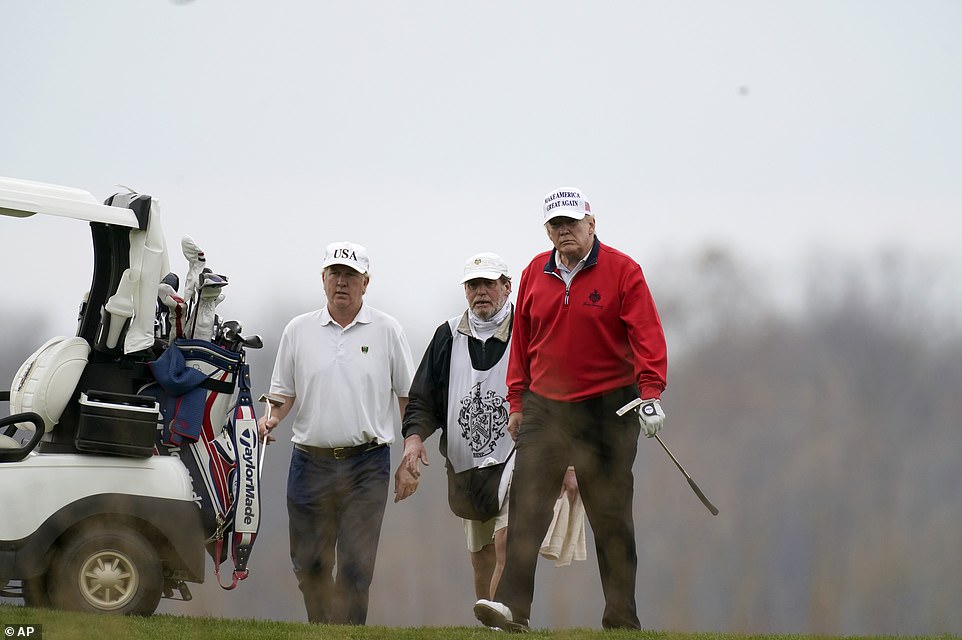 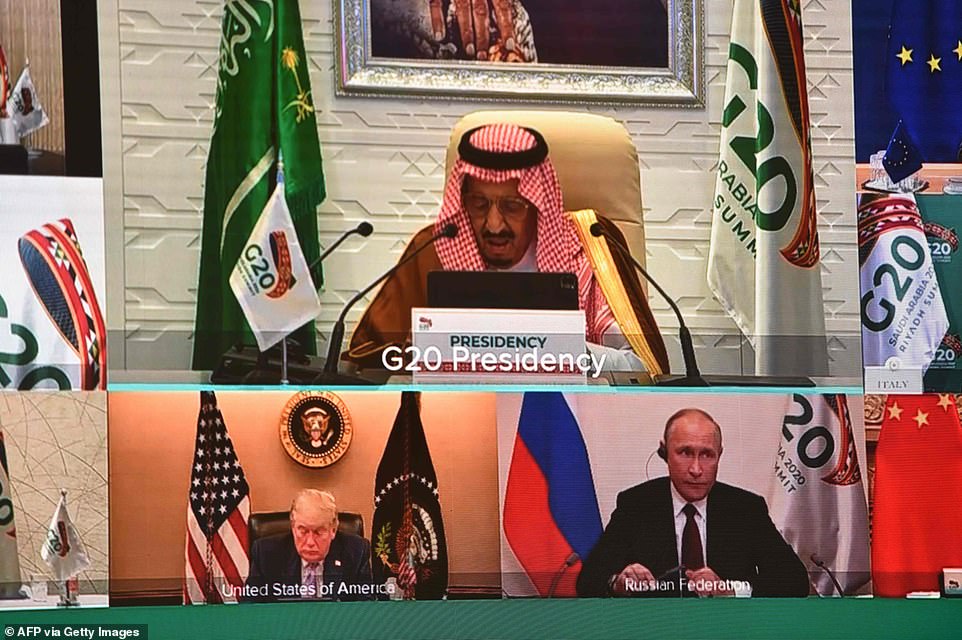 Pictured; President Trump (bottom left) was vritually seated next to Russian President Vladimi Putin during Saturday mornin’s G20 summit, which could be his last 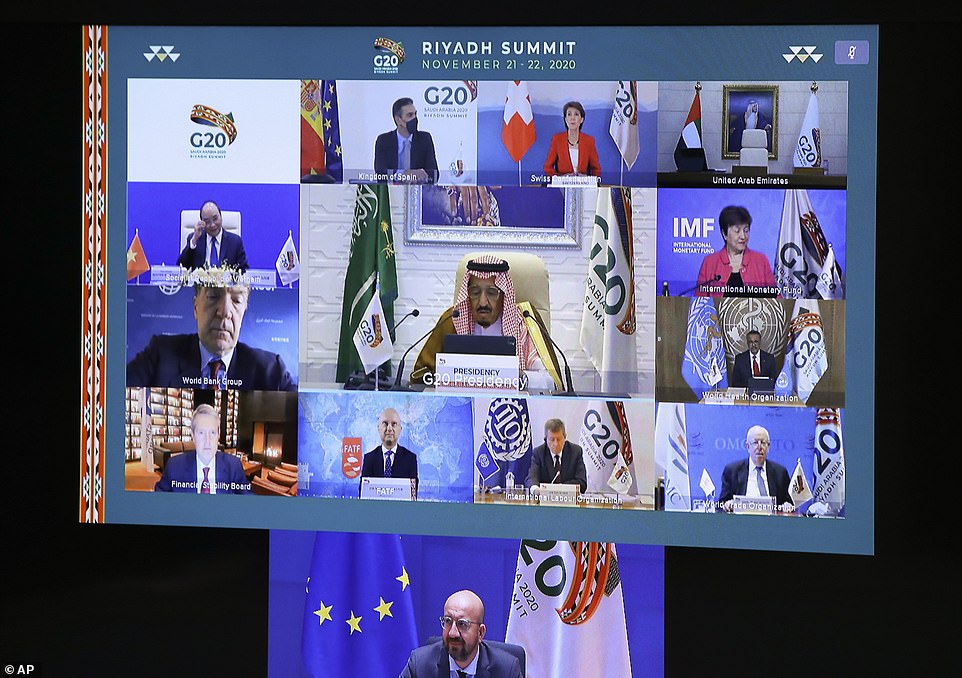 The G20, or Group of 20, summit refers to the annual meeting of world leaders to discuss international economic cooperation.

Throughout Saudi King Salman bin Abdulaziz,’s opening remarks, Trump kept his head down and appeared to be looking at something off screen.

Just 13 minutes after the session began, Trump turned his attention to Twitter where he continued to decry voter fraud.

Biden was named Georgia’s winner after a hand recount was done this week and officials dismissed his voter fraud claims. 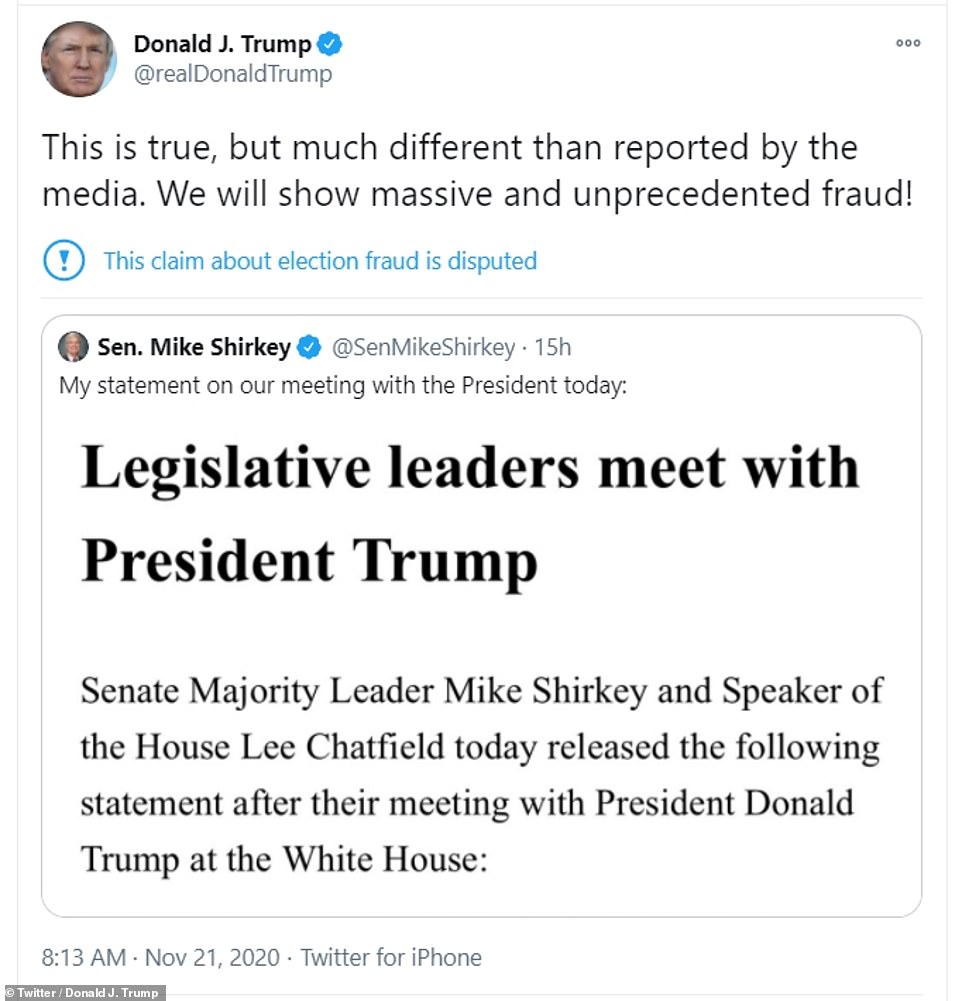 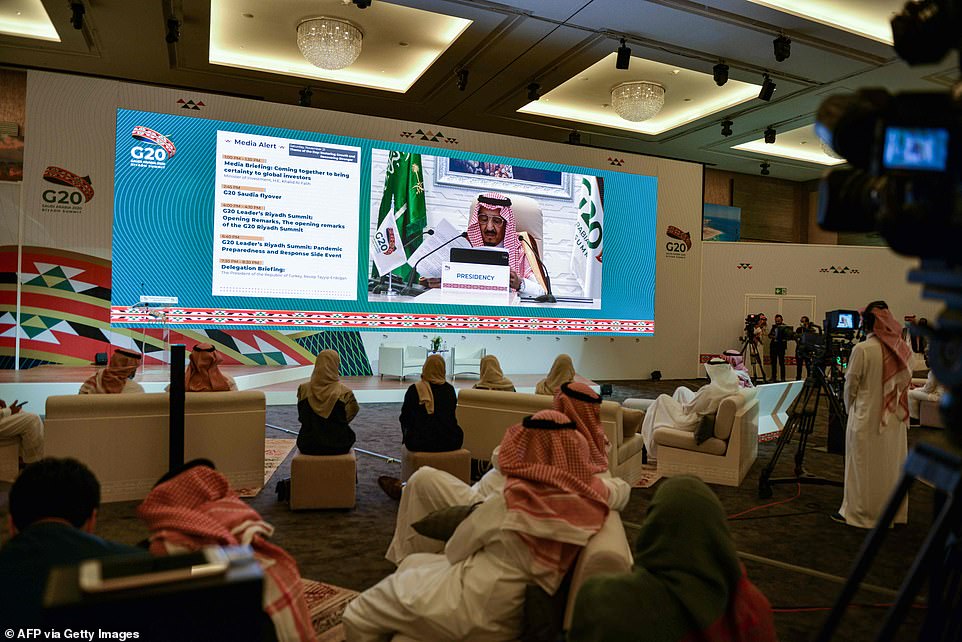 Trump shared opening remarks that addressed the US’s coronavirus response and economy recovery. Much of the remarks stressed Trump’s ‘America first’ ideology and advocated that Americans should receive the coveted virus vaccine first.

Trump had previously knocked heads with other world leaders during similar summits, with differences on climate trade and international trade.

In 2018, Trump left the G7 summit in Canada early and rescinded his signature on the conference’s final communique.

He reportedly asked aides before the 2019 G7 summit in Biarritz, France, if it was necessary to attend.

The Trump administration was taped to host the G7 summit this year, but the coronavirus pandemic pushed it to the wayside.

Trump offered to host the event after the election, but CNN reports there’s currently no plans for the meeting before G7 presidency shifts to the UK in January.

He is expected to attend another G20 summit meeting on Sunday morning, CNN reports.