The family of a woman who was killed on Monday, allegedly by her ex-husband, have asked police for protection due to concerns the suspect may seek to harm them.

Wafa Kenaneh, 37, died after her former husband crashed his car into her vehicle in the northern Arab Israeli city of Arraba and then stabbed her to death.


According to a Friday report by the Ynet news site, relatives of Kenaneh asked the police to provide them with protection amid fears her former husband could seek revenge, but were told it was not necessary.

Additionally, the relatives claimed that police had stopped searching for Rafiah Kenaneh, who had been on the run since the attack on his former wife earlier this week.

“For several days now, rumors have been circulating in the community that the despicable killer will not give up until he completes the murder and revenge campaign on Wafa’s brother and mother,” the family said in a statement. “Whether the rumors are true or not, the despicable killer is still roaming free, and search efforts in the locality have stopped and no police vehicles are seen.”

Screen capture from video allegedly showing passersby trying to push a man away from a woman, reportedly his ex-wife, after he stabbed her in the northern city of Arraba, November 16, 2020. (Ynet news)

Police responded to the accusation, saying that “a variety of investigative actions have been carried out by the police and large police forces have been working to track down the killer and arrest him. Along with the intensive investigation, police activity in the locality and area continues.”

Additionally family members accused the police and welfare services of failing in their duty to protect Wafa, whose former husband had a history of domestic violence.

Wafa, 37, was a mother of four children aged 12-18, and had lived for almost a year lived in a women’s shelter due to threats from her former husband, the Walla news website reported.

The suspect had a history of domestic violence that saw him serve six months in prison, Channel 12 news reported. He later violated the terms of his release and was given another six months on probation.

Another related domestic violence complaint was filed in October against the man, the report said.

According to Ynet, hours before Wafa was murdered, she and her husband appeared at the Sharia court in the northern town of Sakhnin for a custody hearing, where she reportedly said she felt that welfare authorities were working against her.

Wafa reportedly told the court that she had not seen her two older children since she left the family home around a year and a half ago.

Eyewitnesses to the stabbing said that after Rabiah crashed his car into his ex-wife, the two exited the vehicle and argued over who would take care of the children. He then pulled out a knife and stabbed his wife.

Passersby reportedly tried to keep him away from the victim. The suspect then fled the scene in his car. 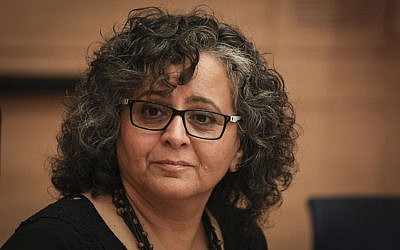 MK Aida Touma-Sliman of the Joint List, an alliance of predominantly Arab Israeli parties, tweeted on Monday that if the reported details of the incident were accurate, it raised questions about the rehabilitation of violent criminals when they exit prison.

“If the murderer was indeed released from prison the failures once again rise up: Not enough rehabilitation, no follow-up of violent men, and still no electronic tagging — and the murder of women continues,” she wrote.

Since the beginning of the year 17 women and 71 men have been killed in the Arab Israeli community, Walla reported, citing figures from the Aman Center for Combating Violence in Arab Society.

Violence against women in Israel has driven recent protests calling for reform.

Demonstrators highlight the fact that a national plan to fight domestic violence was approved in 2017 by the Knesset but has since been abandoned, waiting for funding. Activists say most of the approved NIS 250 million ($71 million) has not yet been transferred to relevant authorities.

Police and social services organizations have reported a major rise in domestic violence complaints since the start of the coronavirus pandemic.

Stuart Winer contributed to this report.


You’re serious. We appreciate that!


We’re really pleased that you’ve read X Times of Israel articles in the past month.

That’s why we come to work every day – to provide discerning readers like you with must-read coverage of Israel and the Jewish world.

So now we have a request. Unlike other news outlets, we haven’t put up a paywall. But as the journalism we do is costly, we invite readers for whom The Times of Israel has become important to help support our work by joining The Times of Israel Community.

For as little as $6 a month you can help support our quality journalism while enjoying The Times of Israel AD-FREE, as well as accessing exclusive content available only to Times of Israel Community members.

Already a member? Sign in to stop seeing this