Two days after four terrorists were killed and a cache of arms and explosives recovered in Jammu, India on Saturday summoned the Charge d’Affaires of the Pakistan High Commission and lodged a strong protest over the attempted attack. It also demanded that Islamabad “desists from its policy of supporting terrorists and terror groups operating from its territory”, the MEA said in a statement.

“The huge cache of arms, ammunition and explosive material indicate detailed planning for a major attack to destabilise the peace and security in the UT of J&K, in particular, to derail the ongoing democratic exercise of conduct of local DDC elections. The MEA summoned Pakistan Cd’A and a strong protest was lodged at the attempted attack, which was only prevented from happening by the alertness of the Indian security forces,” the Ministry of External Affairs said. Pakistan’s Ministry of Foreign Affairs in a statement rejected the charge and “expressed hope that India would desist from making any miscalculation.” Soon after India lodged protest, Pakistan also summoned the Charge d’Affaires of the Indian High Commission.

Demanding that Pakistan must desist from its policy of supporting terrorists, the MEA had said: “India reiterated its long-standing demand that Pakistan fulfill its international obligations and bilateral commitments to not allow any territory under its control to be used for terrorism against India in any manner. It was demanded that Pakistan desists from its policy of supporting terrorists and terror groups operating from its territory and dismantle the terror infrastructure operated by terrorist outfits to launch attacks in other countries.” It also added that the Indian government was “firmly and resolutely committed” to take all necessary measures to safeguard its national security in the fight against terrorism.

On Thursday, a joint team of J&K Police, CRPF and the Army gunned down the four terrorists who opened fire on security forces near Nagrota on the outskirts of Jammu city. Two police personnel were injured in the three-hour encounter near the Ban toll plaza, on the Jammu-Srinagar national highway.

The police recovered 11 AK-47 rifles, three pistols, 29 grenades, explosives and other devices, including mobile phones and medicines, with Pakistani markings. The police described the movement of terrorists as part of a plot to target the DDC polls with an attack that could coincide with the anniversary of the 26/11 Mumbai terror attacks. 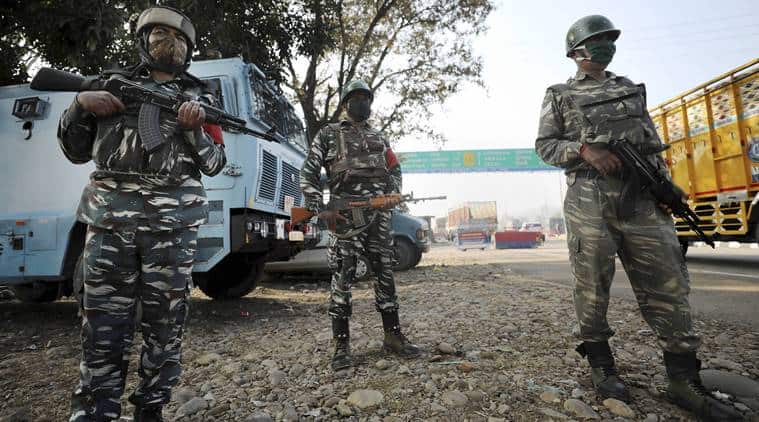 With the District Development Council (DDC) elections scheduled to take place in the Union Territory from November 28, Prime Minister Narendra Modi had on Friday thanked the security forces for having “defeated a nefarious plot” to target grassroots democracy in J&K. The Prime Minister said, “Neutralising of 4 terrorists belonging to Pakistan-based terrorist organisation Jaish-e-Mohammed and the presence of large cache of weapons and explosives with them indicates that their efforts to wreak major havoc and destruction have once again been thwarted.”

The tweets were posted after Modi held a high-level meeting with Home Minister Amit Shah, National Security Advisor Ajit Doval, Foreign Secretary Harshvardhan Shringla, and the chiefs of the Intelligence Bureau and Research and Analysis Wing.

Our security forces have once again displayed utmost bravery and professionalism. Thanks to their alertness, they have defeated a nefarious plot to target grassroots level democratic exercises in Jammu and Kashmir.

Sources told The Indian Express that the meeting assessed the overall security situation in the Valley and discussed ways to put further pressure on Pakistan in forums, such as the Financial Action Task Force (FATF), to stop backing terrorist activity in the newly created Union Territory.

📣 The Indian Express is now on Telegram. Click here to join our channel (@indianexpress) and stay updated with the latest headlines

For all the latest India News, download Indian Express App.